I really enjoyed interviewing Amanda Addison author of Boundless Sky. A children’s picture book about the parallel journeys of a swallow and refugee girl called Leila. Combining bird and human migration help to make this book accessible to a wide age range, and to build empathy and understanding about those that are forced to flee their home.

Amanda Addison began her creative career as an illustrator at the Chelsea School of Art. After art school she produced illustrations for children’s fashion and greeting card design companies. In the early noughties she decided to combine her love of art and books and completed an MA in Writing the Visual. Her projects for both courses involved writing/illustrating stories about journeys which has clearly helped Amanda to deliver a superbly executed story in Boundless Sky.

When she is not writing, she loves swimming, especially in summer her local lido and the Norfolk coast near to where she lives. She also loves swimming in places around the world she has visited from the Dead Sea to an Alpine Lake. She says this “gives her an interesting perspective on new places and allows her to connect with people from all over the world”.

1. One of the things I love about Boundless Sky is how Leila’s story of fleeing war runs alongside the swallow’s annual migration.

What motivated you to write a story about human and bird migration?

I often marvelled at the swallow migration. They love to hang out in summer at a barn near where I live. Their seasonal migration is ultimately to enable their survival – just the same as much of human migration. I wanted to write a story which showed this parallel journey to the reader. And which showed our connectedness both between countries and to nature. In Boundless Sky children across Europe and Africa wonder and welcome the tiny bird.

In April, Boundless Sky was also published by Agyra in Greece, where the swallow is the national bird.  Greece is also hosting some good projects around supporting migrants.

Wrote the author Damian Barr about life during Covid 19. 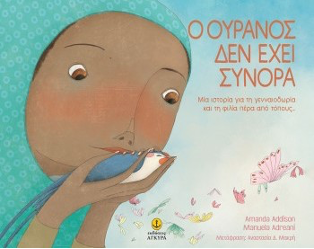 The above words very much sum up the sentiments of empathy and connection which inspired me to write Boundless Sky. For the same boat we can think of our differing circumstances (do we live the super yacht life of plenty, when others have just one oar). Our interconnected lives navigate the same storms such as: war, famine, disease, intolerance, economic and political upheavals and climate change.

Furthermore, ‘We’re all in this together’ and ‘small acts of kindness’ are phrases which have become so important to living through a covid pandemic. Making Boundless Sky relevant to other discussions and issues too.

My heart especially goes out to children caught up in these conflicts. Leila (the girl in the story who is fleeing war) is very much a character in her own right, I wanted her to be able to reflect many children’s journeys to sanctuary, and hence the use of Bird as metaphor for her journey. Both Leila and Bird migrate to survive and thrive.

2. At the heart of Boundless Sky are the swallows and a young girl called Leila’s journeys.

How did choosing to write from ‘Bird’s’ perspective help you tell your story?

I have had fascinating conversations with refugees through my work teaching art and creative writing. But, even though my father’s family came to the UK as economic migrants, I didn’t feel a refugee story was mine to tell.

It can be difficult to empathise with people we feel are ‘other’. The parallel journey alongside the swallow gives familiarity and a common ‘friend’ to the children in the story.

The ‘bird’s eye view’ links the whole story arc together cohesively. A bird’s journey is an accepted part of nature and life. I hoped that the reader would see how we empathise with a migrating swallow and thereby this could open up a conversation about the human need to migrate.

There are many children’s books which depict animals (often with human traits) and I felt it is important for readers to see themselves in the story. There’s also a diverse range of children in some of the other pictures in the story. My hope was for the story to both mirror children’s own experiences and also use the journey from Europe to Africa to be a window on the world.

Leila is a kind girl displayed by her actions (see first image below) where she welcomes Bird to her home and offers Bird a refreshing drink of water. From the illustrations and text, readers can infer that Leila does not live in England but in a warmer climate, suggested by  the sandy coloured ground and understanding of the word “oasis.”

However, later in the story the reader finds out that Leila is no longer at home in the oasis (see second image below) but has fled to England to seek a new home. This is subtly implied through the illustrations, such as where objects are left out of place, suggesting that people left in a rush. Despite this tragedy, Leila’s courage prevails.

3.  Tell me about working with the illustrator Manuela Adreani to produce this book.

Working with Manuela was one of the highlights of bringing Boundless Sky to life. The illustrations have bold compositions realised with a lightness of touch, which I think reflects the heart of the story very well. The Greenaway medal nomination was most deserved.

A book is always a collaboration between author and publisher – and with a picture book there are further opportunities for author and illustrator to work together to make it the best possible telling of the story. There were a few spreads where she sent questions to clarify things. Ultimately the final result was beyond my dreams!

4. I love how story your story helps children of all ages (and adults) understand and empathise with the journeys refugees have to make to get to safety.

How do you hope the story of Boundless Sky could be used to develop understanding and empathy?

The story opens up the topic of what the word ‘migration’ means: the movement of people, animals, plants from one place to another place. Boundless Sky is dedicated to Norwich, City of Sanctuary which has been welcoming migrants and refugees for hundreds of years. Most famous were the Flemish refugee weavers of the 1560s fleeing the Spanish Inquisition in the Netherlands, who brought their now-famous Canaries, remembered today in the nickname of the Norwich City Football Club.

This theme of friendship and kindness is a key theme, displayed by the different characters words and actions. Leila’s story is a key part of this (see my answer to question 2). There are plenty of clues to explore in the pictures of what she is feeling and thinking.

Boundless Sky can play a part in exploring our intellectual and emotional empathy for contemporary children fleeing to a place of safety.

It can be difficult to empathise with people we feel are ‘other’. This parallel journey alongside the swallow gives familiarity and a common friend to the children in the story.

All these points are very much part of my UK publisher’s ethos. Lantana is a social enterprise on a mission to publish diverse and inclusive books for children.

Thanks so much for author Amanda Addison for the opportunity to interview here.

You can purchase copies from me at Readers that Care.